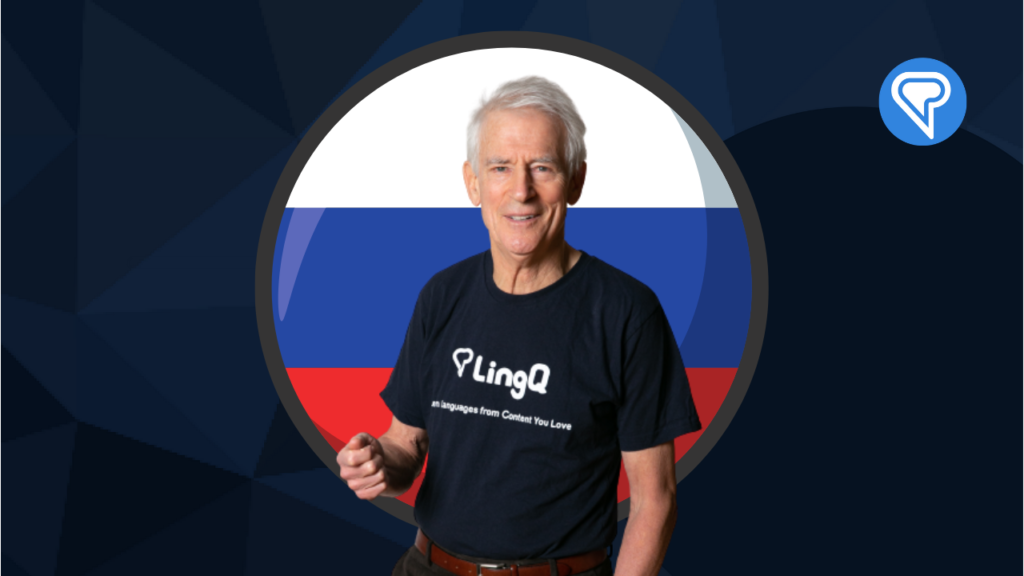 How I Learned Russian

I was about 60 when I started learning Russian and my approach to language learning had always been that you shouldn’t focus on grammar. You need to get used to the language through lots of listening and reading. I had done that with Chinese, with Japanese.

You need to get used to the patterns of language and not focus on the tiny details. People said to me, that will not work with Russian because Russian has very complex grammar. So that became a bit of a challenge.

I had always enjoyed reading novels of Russian literature in English when I was young, so I thought it would be cool to be able to read Tolstoy or Dostoevsky in Russian. So with that, I started learning Russian. At that time, LingQ was very much in a rudimentary stage. It would take us three, four, five seconds to save an individual LingQ. But I started. I bought books: Colloquial, Teach Yourself, Living Language, listened to and read them. As soon as we had certain things that I could do on LingQ, I started doing them.

Yevgeny, who is a great supporter of LingQ in Petersburg, created a lot of great content. As soon as I could I started into audio books I did a lot of listening. In those days, we weren’t yet able to import from YouTube and so forth, but we were able to import some of the classics, just the text, into LingQ.

Below is of my LingQ profile for Russian. I began in 2007 more or less. I had a period of significant activity, which then tapered off. 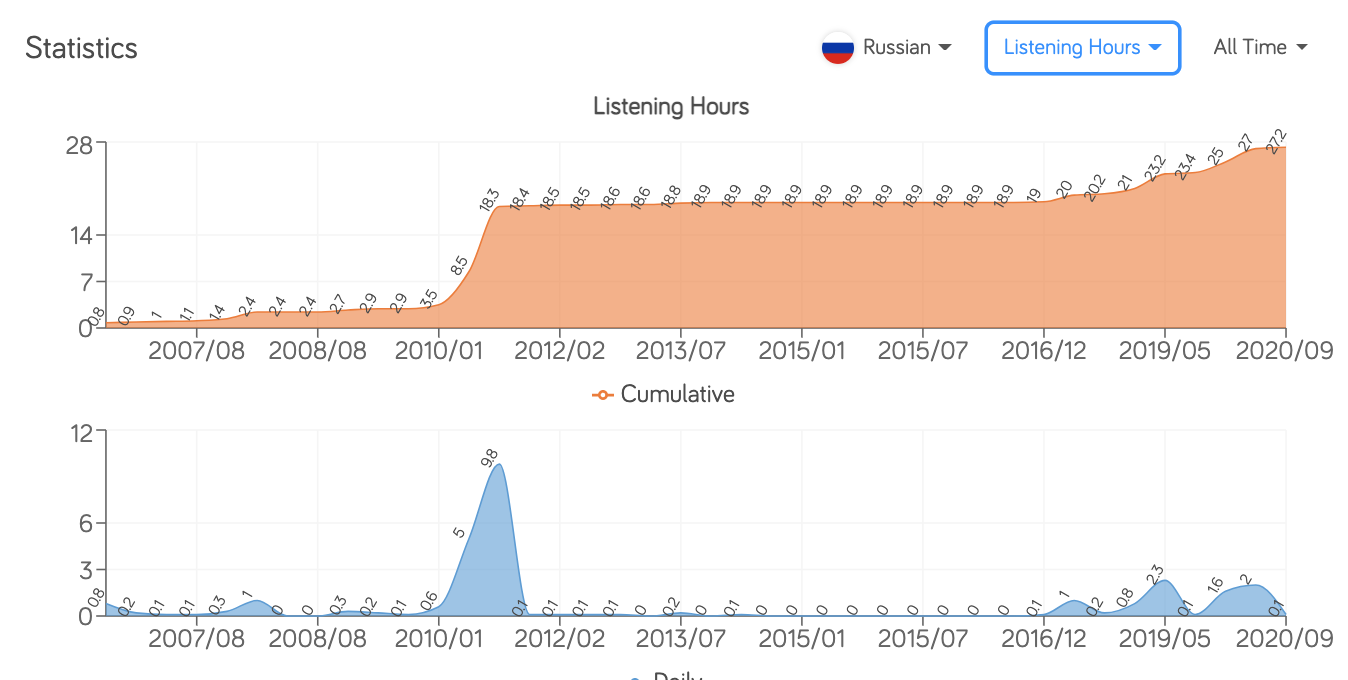 My hours of listening statistics are not accurate because most my listening through this period had been to CDs, watching movies, listening to Ekho Moskvy, but you can see that I’ve been active over a long period of time. I go in occasionally and read an article on LingQ and create some LingQs, so my known words total has grown in this fashion. 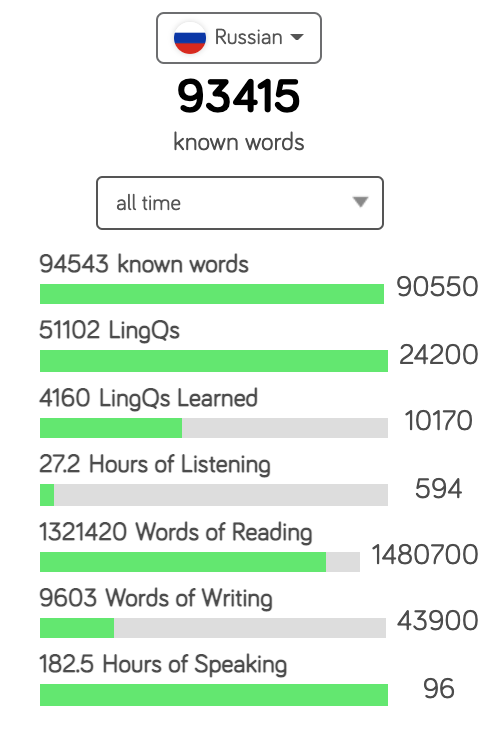 Russian has been a major love of mine. The first audio book that I listened to was The Kreutzer Sonata by Tolstoy because it’s short. I didn’t really understand it, but I was able to import the text because it’s all free of copyright. I worked on it at LingQ. I worked through Chekhov and a lot of the classics of Russian. I can remember being in a place called Silver Star where in fact I was training to ski, in the Vasaloppet in Sweden, and I was out there cross country skiing three, four, five hours a day while listening to Chekhov, Tolstoy, and other classics of Russian literature.

I would go back to my room and look up words. LingQ was very slow then. It took three, four, five seconds to save each word, but I was determined. So that’s where it began.

Most of the learning was from listening to the audio books and then reading them on LingQ, saving words and phrases and accumulating this total of around 90,000 known words. Granted, there are so many different forms of the same word. You can’t start beating your chest and saying “I know 90,000 words”, but it indicates that I’ve done a lot of reading and where I’ve read I’ve largely listened.

A major impact on my Russian learning, aside from the tremendous help I got from Yevgeny and other tutors, is the period where I was doing a lot of talking.We’re talking about a long period of engagement with Russian, so for perhaps the first two years I didn’t speak. But then for another couple of years I’d be on talking to Alana, to Yevgeny and other LingQ tutors, speaking and learning about Russia and learning Russian. It was just a wonderful experience.

Another major influence was Ekho Moskvy, a radio station in Moscow. It isn’t very popular in Russia because it’s somewhat anti-regime. Although in fact, there’s quite a wide range of opinion there. I wouldn’t call them moderate in any way. They’re all very emphatic, but if you listen to a group of these people, you get a sense of what people are talking about in Russia.

The big advantage of Ekho Moskvy is that every day there are around a dozen interviews, audio with text. So every day I would import the text into LingQ. I wouldn’t  bother importing the audio because I would have that on my iPhone, but I’d go through and mine it for words and phrases. I did that for years. Every day I would load up with five interviews. I’d be listening in the car, listening everywhere.

Ekho Moskvy was a major influence on me developing my Russian. Some Russians may say they’re all American Stooges, but that’s not quite fair. There is a variety of opinion, but as with any information source, you have to pick and choose, and you can’t just accept things at face value. I don’t accept everything at face value that I hear on Ekho Moskvy. However, it helped me a great deal.

The other thing that Russian did for me is it got me into the Slavic languages. It was my first Slavic language. And of course, it is difficult. It is difficult because there are many things in Russian that we don’t have in English. We don’t have verbs of motion, cases, aspects of verbs, etc.. You can read the explanations over and over again, and they’re kind of helpful, but the explanations are not that difficult to understand, except that there are so many exceptions that you can get confused. But it’s developing these habits, these patterns of speech that they have in Russian, which are different from English, and that just takes a lot of exposure.

Even at that, as I’ve been away from Russian, and of course my Russian has deteriorated, I make more grammatical mistakes, I search for words. But again, if I get back into it, if I’m with Russian people, I hear how they speak. I pick up on how they speak. I start to refresh the habits that I have lost and acquire new and better habits. So I’m comfortable with where I am in Russian. I didn’t have to write exams in Russian, I just had to enjoy the language, but it was also the door into other Slavic languages.

After Russian I learned Czech because my parents were born in the Austro-Hungarian empire, what became Czechoslovakia. My father had scrapbooks at home of news clippings of times he had climbed mountains, and now I’m able to read them. Czech was a long road. Then from Czech I learned Polish and then Ukrainian and a little bit of a Slovak, which is very similar to Czech. So it opened up the whole Slavic world.

It’s been a love affair with Russian. A voyage of discovery of the Russian world, but also the Slavic world.

How long does it take to learn Russian? Check out this LingQ blog post to find out!